The latest great band to come out of Texas is Oceans of Slumber. Already when Oceans of Slumber, a Houston-based sextet formed in 2011, last year did a cover of Candlemass classic “Solitude” I was hooked. This is a great new find that you too need to discover. Their new album certainly doesn’t disappoint.

This is genre-defying music. Some of the members have a background in death metal and that clearly comes through here and there in Oceans’ music. But there is so much more here. It is hard to put a label on this band. They have no limits on what they can do. This album features both a lullaby and an instrumental piano piece among the heavy rock stuf. And it works absolutely great.

The album (which will be released on 4th March by Century Media) opens with the fantastic title track “Winter”. As so often with Oceans of Slumber songs, this great song features a bit of everything. This is a journey through dreamy, atmospheric landscapes combined with some fast thrash and speed metal influences, a pinch of melodic death metal and plenty of non-metal kind of alternative rock mixed up with some progressive rock, a bucket of blues and some things that are almost pop. And tonnes of what feels like dark and deep emotions in the vocals and lyrics.

In “Devout” we get thrash metal guitars and drums while Cammie Gilbert keeps singing in her own dream landscape. Most Oceans of Slumber songs have a wide range of styles contained within each song. There are frequent tempo and style changes that keep things interesting.

“Nights In White Satin” starts off as a ballad but before it’s finished we’ve been treated to some really heavy stuff nestled in among the love-themed lyrics. It’s a great, powerful track. “Suffer The Last Bridge” is perhaps the album’s best track. Other favourites are “Turpentine” and “Apologue”. The album closes with an instrumental piano track called “Grace”. Again, so different and yet it makes perfect sense. 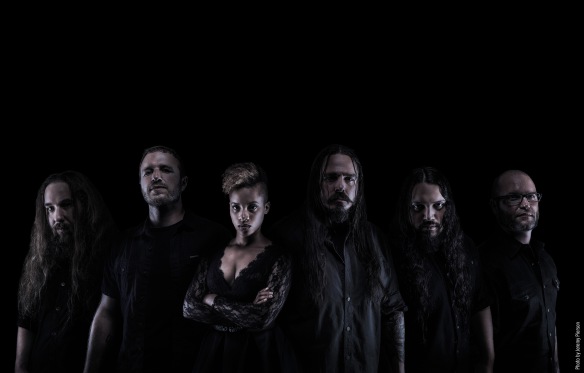 The very talented and rather sultry lead vocalist Cammie Gilbert joined the band after their debut album “Aetherial” and she has really made a difference to this band. She sings like a bluesy angel with attitude, seemingly unaffected by the chaos in the background of the busy sound wall that is Oceans of Slumber.

There are no weak songs on this album. Great songs, great musicians, world-class production and to top it all off the band has a vocalist that stands out from the crowd. That voice is something else. Great stuff. I want more.