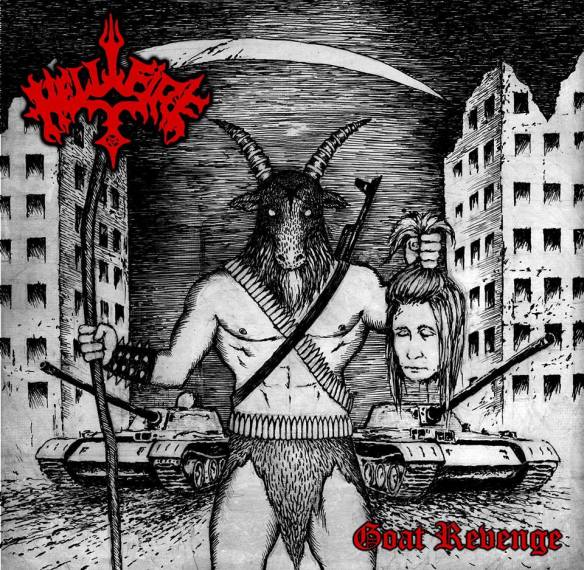 When a band names its EP “Goat Revenge”, how can one not pay attention? Fortunately, this is not just an EP with a great title, it is also a record jam-packed with great brutal music.

More than anything, Hellfire is a band has some great songs. They are far ahead of many other bands playing old-school, underground black or death metal. There are some terrific thrash metal influences on this EP that makes Hellfire’s music quite different. It’s heavy and brutal, yet with some fantastic melodies. It is perhaps best described as a less polished form of blackened death metal with more of an underground feel and plenty of heavy metal guitars. The EP has a rather basic production and a raw old-school DIY sound. The down-in-the-basement production fits the music like a glove. Just the way I like it. The music appears somewhat simple on the surface, but is actually rather complicated with many different twists and turns in a multi-layered and riff-heavy soundscape.

Hellfire was formed in Ukraine in 2014 and the band made its live debut in 2015 playing original black metal music with some influences from old-school thrash and death metal. The current line-up is Karargh on guitar and vocals, Necrobaphomet on bass and Skullcrusher on drums. The “Goat Revenge” EP is the band’s first record release and it promises a great future for this talented band. Hellfire’s “Goat Revenge” has been recorded in Ukraine, produced by the band and is out now on the Witches Brew label.