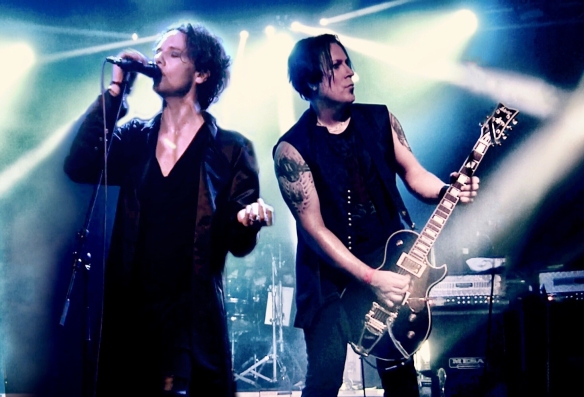 MGT may not be a great band name (it is the abbreviation of the band leader’s name), but behind it lies some terrific goth rock. MGT is a duo made up of British guitarist Mark Gemini Thwaite and South African vocalist Ashton Nyte. Thwaite is best known for having been a member of Wayne Hussey’s The Mission as well as having played with legendary Bauhaus singer Peter Murphy, while Nyte made a name for himself with The Awakening.

There are some obvious echoes here of Bauhaus and The Mission but also of Wayne Hussey’s earlier band The Sisters of Mercy. There are also some industrial elements here not too far removed from bands such as Nine Inch Nails and, unsurprisingly, The Awakening. The album features mainly original goth-inspired rock songs where Thwaite’s guitars are perfectly paired with Nyte’s baritone voice which manages to remind us of both The Mission’s Wayne Hussey and The Sisters of Mercy’s Andrew Eldritch while at the same time sounding like himself. It’s a voice made for singing goth rock. The “Gemini Nyte” album’s 13 songs all live within the goth rock genre, but stretches from atmospheric ballad-like songs (like the terrific “Atlanta”) to more industrial-influenced rock like “Everything Undone”. The epic “Dystopia” is my favourite song on the album.

On the album the core MGT duo is backed up by Killing Joke drummer Paul Ferguson and Fear Factory’s Burton C. Bell is one of several guests on the album. MGT will tour in the US in March and the band’s touring line-up will feature former The Mission bassist Richard Vernon and drummer Nick Mason (Living Dead).

MGT’s “Gemini Nyte” is out now via Cleopatra Records.