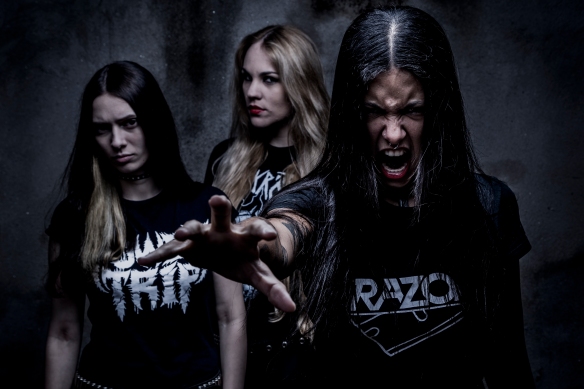 Brazil’s Nervosa is back with a fab new album of punishing old-school thrash metal with relentless shredding and anger.

Brazilian thrash metal band Nervosa is back with its aggressive third album. It’s in your face. It’s like an angry pack of wild dogs biting your leg. It’s sinister, aggressive and wonderfully splendid. Nervosa, a trio consisting of Fernanda Lira on vocals and bass, Prika Amaral on guitar and Luana Dametto on drums, plays riff-happy, punishing, relentless and raw thrash metal. There is constant aggressive shredding. The energy and the aggressiveness are always present in Nervosa’s music. It sounds kind of animalistic. Like an out of control wild animal locked into a small cage that is trying to break free.

The album is produced by Martin Furia. When I recently met him here in Japan (he was tour manager for Destruction), he said he very happy with the result of his work on the Nervosa album. Too right, he should be happy. When you have a band with such raw aggression and oversupply of energy, it can be somewhat tricky to capture that in the studio and get it to sound right on an album. But Furia succeeds. He has toured with Nervosa as the band’s sound engineer which probably explains why he’s the man who can take this untamed trio and get them to deliver in the studio as well.

There are some fab uncompromising songs here, such as “…And Justice For Whom?”, “Vultures”, “Raise Your Fist!”, “Fear, Violence and Massacre”, “Never Forget Never Repeat” and so on. No fillers, no compromises, just great thrash metal on every song on this album. My favourite tracks are “Cultura do Estupro” and “Kill The Silence”, a track I like as soon as I see the title. This is a very solid album which includes guest appearances by João Gordo (Ratos de Porão), Rodrigo Oliveira (Korzus) and Michael Gilbert (Flotsam & Jetsam). Good stuff. Love it. I’d love to see these ladies on stage in Japan because live this will no doubt be even more explosive.

Nervosa’s album “Downfall of Mankind” is out now via Napalm Records.