Outspoken artist and activist Otep Shamaya and her band are back with plenty of attitude and some clear political messages on a new controversial album.

Otep is a divisive and controversial artist. She’s in your face, she’s angry, she’s foul-mouthed, she’s political and she’s got a reputation. She makes social and political injustices a central part of her creative output. Otep gives us modern, hard-hitting rock in a Rage Against The Machine kind of way (with some hints of Suicidal Tendencies here and there). Some people want to put a nu metal or alternative metal label on this music. I personally don’t like those labels, but perhaps that is what it is. It has a foundation in hard rock and is incorporating plenty of spoken words, rap and hardcore influences. The lyrical themes are dominated by gender and race issues, gay rights, animal welfare, immigration, gun control and so on. With Otep, there’s no middle ground and no compromises. I had zero expectations on this album. Otep the activist has somewhat overshadowed Otep the artist for me. But as I listen to the new album, l am pleasantly surprised. It is actually a very good album. Either you like her style or you don’t. If you do, then this is a fantastic album. If you can’t stand her politics and confrontational style, this is not for you. Either way, Otep is for real and she’s not hiding anything. And she’s good at what she does.

The hard-hitting track “Shelter in Place” is one of the best songs on the album. It leaves the listener in no doubt about where Otep stands on the gun control issue (“Hey, hey, NRA. How many kids did you kill today?”). “Cross Contamination” deals with the double standards of the Christian right in the US that seems to be OK with the fact that Christian values currently are in short supply in the Oval Room. “Boss” attacks gender roles in a song with big balls and plenty of attitude. In “To The Gallows” Otep attacks the current US leadership with lyrics such as “Now The White House is infected with madness” and she goes on singing about “blood on your hands” and “we’ll walk you to the gallows”. Such words will both win her fans and attract hatred. “Sirens Calling” provides a breather from the in-your-face music and it is a beautiful, but haunting, spoken monologue. It is the album’s highlight for me next to the more energetic rocker “Halt Right” and the street poetry of “Undefeated”.

I tip my hat to you, Otep. You’ve done well with this new album. The Trump Brigade will hate this, but that is surely part of your plan here. I guess that when Donald Trump and his supporters say “buy American products”, they most likely don’t mean this product.

Otep’s album “Kult 45” is out now via Napalm Records. 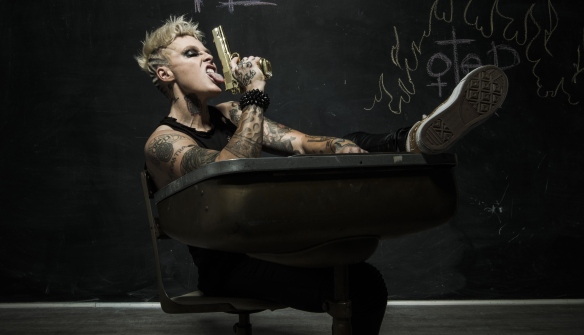