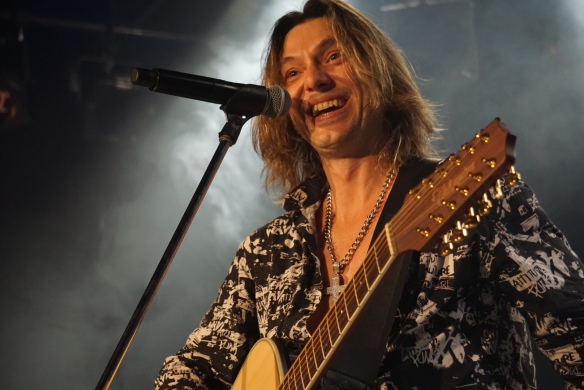 Edu Falaschi and The Dark Element at Shinjuku Blaze, Tokyo on 6th October and Esaka Muse, Osaka on 7th October 2018

It is exactly 7pm when the intro starts playing and the members of The Dark Element come up to the stage. It is remarkable how the Japanese fans love Nordic metal. When Finnish guitarist Jani Liimatainen and Swedish singer Anette Olzon together enters the stage, the audience salutes them with loud screams and horns up all over the room. Liimatainen has been coming to Japan almost every year since the first time he played here with his former band Sonata Arctica. It has, however, been ten years since the Japanese fans have had the opportunity to see former Nightwish singer Olzon in action and they clearly missed her talent. Opening both the Tokyo and Osaka shows with “The Dark Element”, a song that mixes a lot of electronic music with metal, Olzon shows us that even after all this time away from the stage, her energy and passion are still the same. With a powerful-yet-sweet voice, she sings, dances and interacts with the fans like no one else. With “Last Good Day” and “Dead To Me” the band encourages everyone to dance, sing and jump along, although in Osaka the audience is shyer and prefers to enjoy the show quietly. When the band makes a brief pause for some gear changes, Olzon talks to and jokes with the audience as if all of the people there were close friends of hers. Then she announces the beautiful “Here’s To You“, a song full of mixed feelings and a great melody that makes Olzon give an intense and emotional performance on both nights. With an impressive interpretation of each verse, she puts her heart out, telling the story behind the lyrics with every movement of her hands and body. It is definitely the highlight of both the Tokyo and Osaka shows. 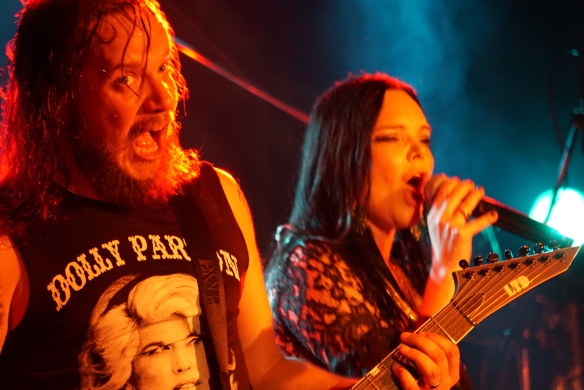 During “Halo” something unexpected happens with Anette headbanging along to the music. For those who have been following her career since her Nightwish days, it is a nice and somewhat funny surprise, as she has never been known for headbanging during her symphonic metal years. With “The Ghost and the Reaper” and “My Sweet Misery”, the two singles of The Dark Elements debut album, the band proves that even playing very few shows and not rehearsing a lot, they are all well engaged and prepared for whatever comes. The Tokyo night is the first show of Jere Lahti as new The Dark Element drummer, but the chemistry he has with the whole band, especially with the bassist Jonas Kuhlberg, is so strong that it seems he has been in the band since day one. In Osaka, the stage space and the lights are a little limited. However, the energy and heat of both the band and the audience make the Osaka show a perfect end for this tour. With this tour, Anette Olzon surprises me with her amazing performance. But when it comes to her, my expectations are always very high. Even if after all these years of little musical activity by her, I almost thought that she had lost her passion for music. Fortunately, she proved that I was terribly mistaken.

“In Excelsis”, the opening intro of the “Rebirth” album, starts Edu Falaschi’s show. With the whole band ready to destroy the Tokyo stage, a beautiful light illuminates the flag behind Aquiles Priester while my attention is caught by the nervousness of the guitarist Diogo Mafra. He seems to be breathing too fast and I can almost see his chest pounding while he tries to stay calm. Following the intro, the band starts playing “Nova Era”, one of the most acclaimed songs written by Edu Falaschi during his Angra era. The audience in Tokyo is singing so loudly that it becomes hard to hear the music itself. When Falaschi enters the stage, the audience pushes to the front and every single person in the room is now jumping and singing so happily that it is clear that no one cares about being a little smashed. By the first notes of the song, it is noticeable how Edu has been working hard on recovering his voice and it feels like I am listening to his voice from the original recording. With “Acid Rain”, “Angels and Demons” and “Running Alone”, the band leads the audience to madness, with lots of headbanging and jumping. After many fast songs, Edu takes an acoustic guitar, taking the fans 14 years back in time with the ballad “Wishing Well” from the album “Temple of Shadows”. This song is about hope and belief and Falaschi’s voice gives it an emotional touch. Just like Mafra, Edu seems to be very nervous and his hands are shaking. It is impressive to see how well he performs the whole song while handling both guitar and vocals, just like a true artist always does. In Osaka, the whole band seems a bit more relaxed. Opening the show with “Winds of Destination”, this time all the attention is on keyboardist Fabio Laguna. Laguna plays a long, beautiful and sad part all alone with only Falaschi’s voice as support. Their joint performance is phenomenal. No one can sing this song with the same intensity as Edu, just as no one can play it as hard as Laguna. It is very pleasant to see them playing together again, reminding us how good they are together. “Heroes of Sand” is performed with a lot of emotion at both shows. This is probably the main masterpiece of Falaschi’s career as a songwriter. Again, his voice just slips through every note beautifully. It has been eight years since the last time Edu performed in Japan and 11 years since Priester and Laguna were here. Both the musicians and their fans had clearly longed to be reunited.

Then, Falaschi presents his latest release, “The Glory of the Sacred Truth”, a song written especially for an EP with the same name that was released only in Japan in September and recorded with the “Rebirth of Shadows Tour” line-up. This song is a gift from Edu to all of his fans worldwide for never giving up on him, even in the darkest of times when he struggled with voice loss. It is about always thinking positive and having faith in yourself. Although the whole band’s performance on this song is awesome, it is impossible to not get impressed (again!) with Aquiles. That he is the best power metal drummer of all times is already known to the fans of the genre, but to watch him performing live, especially this song that has a drum intro, is something else. The man is literally an octopus; it is hard to think how he can do all of that with only two arms and two legs. It is not surprising that the whole venue, in both Tokyo and Osaka, bows down to him after this song. “The Shadow Hunter” shows the quality of the guitarists Falaschi has chosen to follow him on this journey. With an acoustic intro, Roberto Barros plays each chord with such ability that the whole world stops to watch him. Then, when the electric guitar enters to make the song heavy, Barros and Raphael Dafras show why Falaschi describes them as “the best guitar couple of Brazil.” He is definitely right about that.

With another pause, this time for Edu to present his awesome band, the audience cheers every musician with a warm welcome, making each of them thrilled to be in Japan and of course, saluting Priester and Laguna like the old days. By the end, Priester takes the microphone and presents Falaschi as “the best Brazilian metal songwriter ever” and both the Tokyo and Osaka audiences go crazy, screaming his name all over and cheering him just like they did eight years ago. With “Rebirth” Falaschi and his band show gratitude for all the years of support and gets all the fans to sing the words with him. The band closes both nights with the fast track “Spread Your Fire”, performed in a rather heavy version. The highlight here is the bassist Dafras, playing faster than the speed of light and making things even more insane. This Japan tour was a terrific celebration of Edu Falaschi’s Angra years.