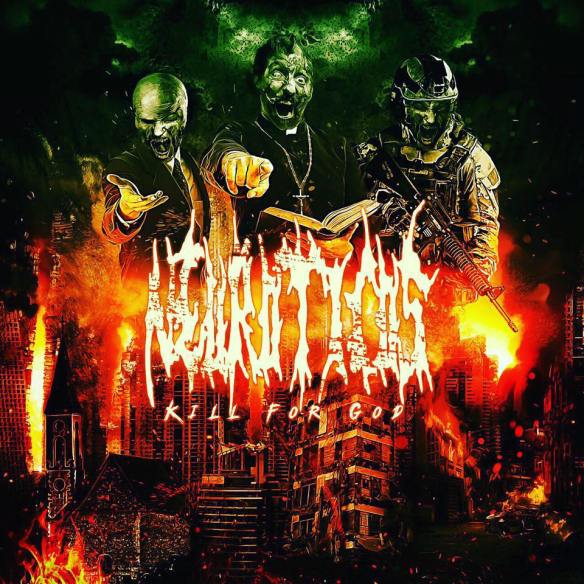 Brazilian-Japanese death metal band Neuroticos is finally releasing its debut full-length studio album some 15 years after forming. The wait has been worth it. This is one crushing metal album without compromises.

Formed in Hiroshima, Japan in 2004, Neuroticos is led by Brazilian brothers Bruno Dias Matsuda (vocals) and Kleber Dias Matsuda (guitar) and also consists of Jumpei Nakamura on bass and Yuichi Ishiguro on drums. I have seen them perform live in Tokyo a number of times and have always been impressed with their crushing delivery of this terrific kind of underground death metal. Neuroticos’ music is always brutal, crushing and without compromises. If you like your metal extreme and hard-hitting, this is a band for you. Neuroticos plays a version of metal firmly based on old-school death metal, but without sounding dated. This is not retro music. This is here and now. They have created their own music based on Brazil’s proud tradition of extreme metal. “Kill for God”, the band’s first full-length album, opens with some haunting church bells and some splendid heavy guitar riffs before the mayhem kicks off. The title track is among the album’s best tracks. It’s like being hit in the face with a metal bar and then dragged behind a getaway car. Fantastic! “Blinded by War” is another favourite track. But “Pray Until You Die” is the stand-out track on this album for me. It immediately knocks you to the ground, helps you up on your feet again, only to kick you to the ground again. Brutal! Overall “Kill for God” is a splendid album and Neuroticos is among the best of the many interesting metal bands in Japan today.

Neuroticos’ album “Kill for God” will be released on 16th June. To mark the release of the album, the band will tour Japan during July with shows in Hiroshima, Osaka, Tokyo, Sendai, Nagano, Nagoya and Sapporo.