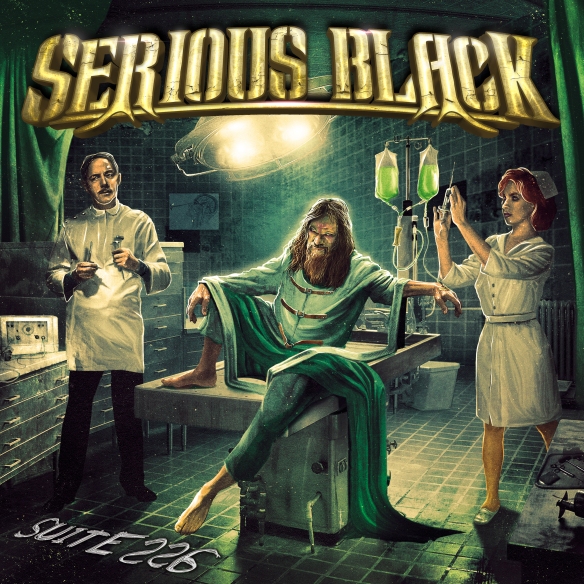 Serious Black is often called a power metal band, but the band’s music is actually quite varied. The music all lies within the boundaries of the melodic hard rock genre but with bits and pieces borrowed from theatrical rock acts like Avantasia and Ayreon. There’s also indeed a healthy dose of power metal on offer. There are great melodies, plenty of catchy hooks and some fine guitar work. The end result is very enjoyable. I really like this. Serious Black is a multinational metal band with some serious pedigree. The band was co-founded by Roland Grapow (Masterplan, ex-Helloween) in 2014 but there have been quite a few people coming and going since then. The current line-up of the band consists of Urban Breed (vocals), Dominik Sebastian (guitar), Mario Lochert (bass) and Ramy Ali (drums). Their debut album “As Daylight Breaks” was released in 2015 and “Suite 226” is the band’s fifth full-length studio album. Swedish vocalist Urban Breed (ex-Bloodbound, Tad Morose) has a terrific voice made for this kind of music. He also seems to be the one behind the band’s theatrical parts. He’s a showman and he knows how to entertain both visually and musically (something which was evident when Serious Back performed in Tokyo a few years ago). The album opens strongly with the single “Let It Go”. Highlights for me also include the terrific “When The Stars Are Right” and the title track “Suite 226”. “Fate of All Humanity” is straightforward melodic rock and on this solid album it sits comfortably right next to the majestic and dramatic track “Castiel” – which perhaps is where this splendid album hits its peak – and the power-metal track “Heaven Shall Burn”.