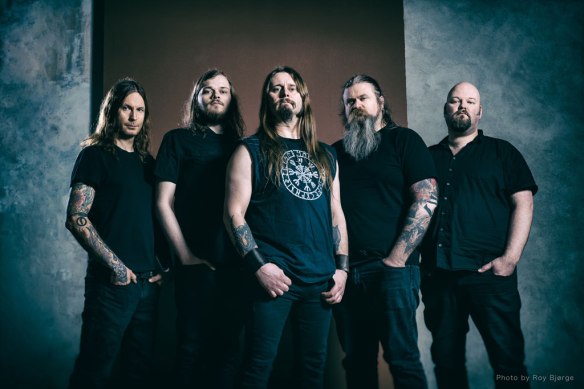 “Utgard” is Enslaved’s fifteenth studio album since guitarist Ivar Bjørnson and vocalist/bassist Grutle Kjellson founded the band in Norway in 1991. It is, without doubt, one of the band’s best albums to date. The band’s deep Norwegian roots have always been very present in its music. Enslaved’s Viking metal is a glorious and unholy mix of black and folk metal and progressive rock. Somehow they manage to both carry on the folk metal tradition and explore new musical territories. To my ears, this band sounds distinctly Nordic. The music is beautiful in a cold, dark and haunting way. It is dreamy (at times this sounds like Sigur Rós meets Bathory) only to take violent turns into extreme metal. Throughout the whole album, there are constant tempo and musical style changes. I love it. No rules, no limits, just great music with deep Nordic roots and lyrics based on Norse mythology. The band’s two newest members, drummer Iver Sandøy (Trinacria) and keyboardist Håkon Vinje (Seven Impale), prove to be great recruits for the band as the addition of their clean vocals make the prog-sounding bits excellent. The current line-up of the band is rounded out by guitarist Arve “Ice Dale” Isdal (Audrey Horne, Demonaz, Ov Hell, Trinacria), who joined in 2002. The album kicks off in folk metal valley with the track “Fires in the Dark” and it continues to take us on quite a musical journey over the album’s nine tracks. One of my favourite tracks is “Jettegryta” where we get to hear the many sides to this fabulous band. The song is a terrific melting pot of contrasting styles. The epic nature of “Homebound” also makes that magnificent track a favourite of mine. What a great boundary-pushing album Enslaved has put together! I hope we get to see them perform these songs live on stage soon. This epic material deserves to be performed in a live setting.

Enslaved’s new album “Utgard” will be released on 2nd October via Ward Records in Japan and internationally via Nuclear Blast.