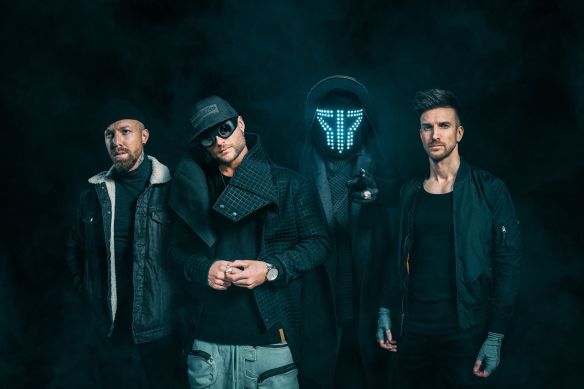 Chris Adam Hedman Sörbye made a name for himself as a touring vocalist with Amaranthe a few years ago. Now he’s back with his band Smash Into Pieces’ fifth studio album, “Arcadia”. It’s poppy but with some serious arena rock potential.

Swedish vocalist Chris Adam Hedman Sörbye is best known in rock and metal circles as a touring stand-in vocalist for Swedish melodic metal band Amaranthe around 2016-2017. There he did a stellar job filling in and doing justice to Amaranthe’s music. In his own band Smash Into Pieces, he gets to be himself. “Arcadia” is the fifth studio album since the band was founded in 2008. Does Smash Into Pieces play rock? Or is it pop? I don’t know. It’s modern, melodic and it’s good. It manages to be 1980s chic, contemporary and futuristic at the same time. This is electronic music with a lot of keyboards and a lot of programmed music. Some of the music on this album is pure pop, some of it is rock and on some of the songs, the band has brought in some of their rock and metal vibes to both the songwriting and Chris Adam’s vocal performances. But it’s always melodic and mostly dance-friendly. At times this reminds me somewhat of the work Japanese electronic rock band Boom Boom Satellites did. “The Chosen One” is one of the highlights of the album. Chris Adam’s voice really gets to shine here. It’s a very strong song – here performed in a quite poppy version. But add some guitar riffs and some proper drums ad this could be a massive arena rock anthem. Similarly, “Big Bang” has major potential to become an arena rock hit and so do “Wake Up” and “Godsent” (where we do get some decent guitars). The title track “Arcadia” makes me want to dance. These songs will fit neatly into the band’s live show together with the best bits from its back catalogue. Smash Into Pieces is the kind of modern genre-bending band that has great potential in the Japanese market. These Swedes have all the talent and skills to take this band to the next level. They did play here in Japan in 2013, but I think it is time to give this another proper shot. This kind of melodic contemporary music could be great for a special guest slot on a Babymetal tour or opening at an arena gig by One OK Rock. I dig this rather dance-friendly album. It’s often more spun sugar than raw meat, but it’s quality music. However, I can’t stop wondering what some of these songs would sound like if proper guitars and drums were added. Some of the band’s earlier releases have prominently featured guitars and this time they opted for more keyboards and less guitar (a bit of a mystery for a band with two guitarists – Benjamin Jennebo and Per Bergquist – and no official keyboard player). But perhaps that will be slightly different when these songs are taken to the live stage.

Smash Into Pieces’ new album “Arcadia” will be released on 28th August via Gain/Fifth Island Music.